Combine the Skills of Your RPA Developers and Data Scientists | UiPath

In a perfect world, you’d shift from an instinctual optimism to a data-backed prediction. You’d know from day one how much money your department will have on hand by the end of the quarter. You’d know exactly what you can budget for and what resources you can dedicate in the next quarter.

By combining the predictive capabilities of artificial intelligence (AI) and machine learning (ML) with automation, you can bring this high value information to your fingertips. However, there exists a divide: the two teams that can tackle these complex data challenges typically don’t work together. I’m talking about your robotic process automation (RPA) developers and your data scientists.

Data scientists are isolated in silos

To practically introduce AI in the enterprise and transform your organization with automation, getting the RPA developer and data scientist teams together is key. Silos aren’t uncommon, especially in large enterprises, but getting these two particular teams together is one of the most impactful changes you can make. Both teams want to help inform better, smarter processes and business decisions, but that doesn’t mean they work together. There tends to exist an organizational gap between the teams that causes them to use unnecessarily separate means to get to similar destinations.

There’s currently a shortage of data scientists, so if you have a team, it’s best to use them to their fullest potential. Unfortunately, these rare, expensive unicorns are often misunderstood both by the organizations that employ them and by the RPA teams they could be working with.

There are four main reasons companies underestimate the value of data scientists:

When these four reasons combine, companies tend to underestimate and underutilize their data scientists. Little do they know, however, that unlocking their value is just one team away.

The mindsets of RPA developers and data scientists tend to be different because they have different workflows and different timelines. When your workflow diverges, your mindset will too. This is natural, but it also makes it difficult for these teams to communicate across departments, creating silos.

Trung Nguyen, data scientist at MSD, provides a good example. In an article on intelligent automation, he breaks down RPA and ML workflows into distinct charts, which you can see below. Look, in particular, at how the RPA developer focuses on writing rules, whereas the data scientist focuses on training ML models. 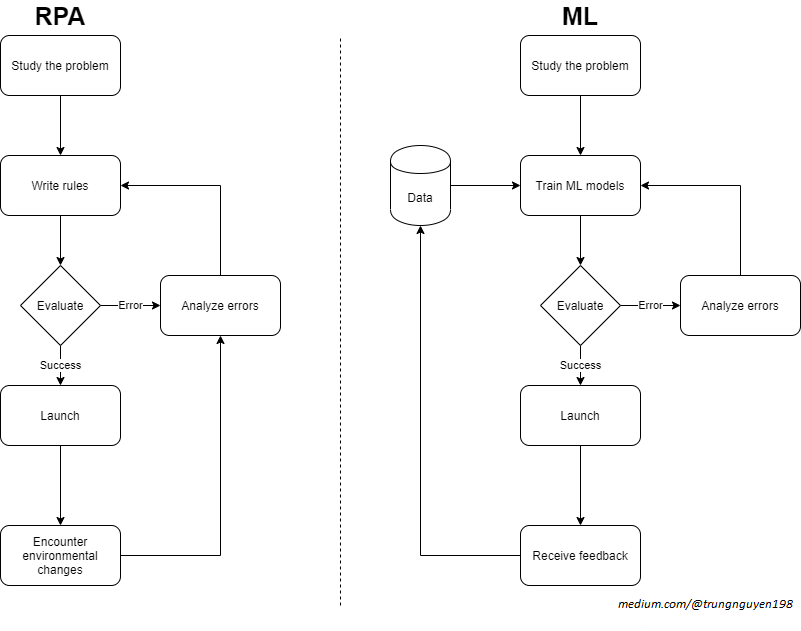 Both teams start by studying, and both will evaluate, launch, and analyze the errors in their solutions. After that, the RPA developer typically shifts their strategy once they encounter environmental changes, whereas data scientists typically funnel feedback into data that further trains their ML models.

This might seem like a small difference at first glance, but the differences cascade once you zoom out and look at timelines.

The time horizon for complex problem solving—the kind data scientists are best suited to tackle—is at least six months. RPA developers instead tend to use agile workflows, measuring progress in terms of weeks. This means RPA developers, immersed in these faster workflows, tend to think in terms of quick solutions, whereas data scientists tend to drift toward more exploratory projects.

Despite the gap we’ve described, RPA developers and data scientists speak the same language—or at least code it.

The UiPath State of RPA Developers Report 2020 shows that more than 90% of RPA developers have a college degree and that Python is already one of the top languages known to RPA developers. The knowledge gap isn’t as wide as you might fear.

It’s not like the gap is invisible to data scientists either. Research shows that data scientists spend almost half their time on problems that RPA developers can solve better and faster. Remember (according to the 2020 Anaconda Data Science Survey we cited above), on average, 45% of their time was spent getting data ready before they could use it to develop models and visualizations.

Let’s sum this up:

So that leaves us with a question: how can we put these clearly complementary teams together?

Breaking down the wall between data science and RPA teams

If leaders can break down the barriers between these teams, they can unlock massive opportunities for their companies. To do so, leaders must enable data scientists to communicate their needs to RPA developers and coordinate both teams to achieve greater outcomes on complex problems.

Smart organizations put a C-suite-level leader in charge of both teams. In our case study with Heritage Bank, David Johnston, Manager of Intelligent Automation and Process Excellence, said, “Data science and automation teams are often disconnected. In our organization, however, both of those teams report to our CFO.” This was a huge part of the reason Heritage Bank, working with UiPath, could achieve 98% accuracy across their most recent ML models.

While that may not be always feasible and if organizational reporting structures are different, respective leaders can ensure that both teams talk to each other and that the communication is truly bidirectional. To facilitate that level of collaboration, leaders can promote high-value use cases that emphasize the benefits of both teams working together. Creativity is imperative. As we explained, there’s a shortage of data scientists, so smart leaders will find new ways to source data scientist hires and upskill RPA developers to take on data science-adjacent work in their stead.

When data scientists have a problem, RPA developers can come to the rescue.

Inside Big Data points out two major problems data scientists tend to have:

These benefits combined not only make the lives of data scientists either but also help them accomplish more than they could previously. RPA developers enable data scientists to do their jobs faster and better, as well as make the final solution easier to deploy.

The goal of a forward-thinking enterprise isn’t to find a compromise between the two often divergent teams; it’s to realign them both so that they can accomplish more together than they could apart. Data science needs accurate, clean, and verified data. RPA processes produce clean data and often start with data that’s messy and unstructured.

Without the right tool set that surfaces data about business processes and automation workflows, even the best leader will struggle to make the two teams work together. The UiPath Platform provides the tools companies need to unite their data science and RPA teams.

Let’s think through one last example: if your company wants to start using sentiment analysis, your RPA developers can implement one of our starter models and give it the data it needs to work. If your company then wants to make the sentiment analysis more accurate and more robust—or otherwise tweak the given algorithms—then you need a data scientist.

Another way to think of it is that if you’re using math to solve a problem, that’s the RPA developer’s role; if you’re trying to figure out the math, that’s the data scientist’s role. UiPath provides a platform that includes both types of work.

Your company can do so much more than you’ve imagined, once you combine data science and RPA. UiPath AI Center enables you––whether you have a data science background or not––to drag and drop AI right into your business processes. To get a hands-on perspective, try a trial for UiPath AI Center today.

The virtual event will be held over four weeks, starting February 24, 2021. Whether you’re new to AI or an experienced AI practitioner looking to supercharge your robots, there’s a session for you.